'Tis the season to tell heartwarming stories - like the time our family room was transformed into a waterfall because of an ice dam. 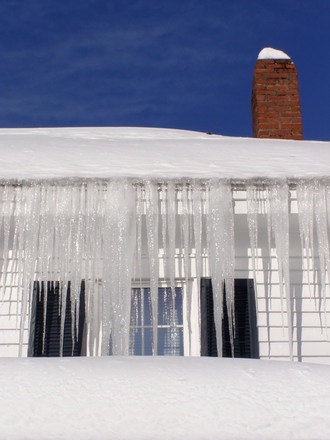 For those of you who don't know the joy of living in sub-zero temperatures in the winter, ice dams are blocks of ice that form on a roof from an accumulation of water, snow and ice. When the dam grows large enough - as ours did - it prevents the water from melting snow from draining as it otherwise would. With nowhere else to go, the water can leak into a home, as it did to our Chicago area home several years ago.

The initial hysterics that ensued upon the initial discovery - and the fun we have re-enacting our respective responses - is the stuff that heartwarming family memories are made of. The moral of the story for my daughters: always tuck your Barbies safely back into their Barbie Dream House before going to bed at night. Otherwise, they could "wake up" the next morning to a nightmarish deluge from overhead. They dry out OK, but their hair never quite looks or behaves the same.

The moral of the story for me: When you're new to a neighborhood, always add a reputable roofing company to your "go-to" contractor list. Since we were in the habit of moving about every five years or so, I wasted no time in assembling a contractor list that included a plumber, an electrician and a heating and air conditioning technician soon after moving to a new community. I learned the hard way - after a lengthy and costly debacle over the ice dam - to include a roofing contractor on my go-to list, too.

Since moving to Las Vegas last summer, I don't think I have much reason to fear a massive ice dam forming on my roof. But I have even less reason to fear being misinformed, misled and mistreated now that I've found First Quality Roofing & Insulation. They've become more than my go-to roofing contractor; they've set the bar so high on dependability and trustworthiness that I realize it's no wonder they're so adept at toting around ladders.

Most homeowners have a "contractor from hell" story

I would never presume to corner the market on a "contractor from hell" story. They seem to be everywhere. But the fundamental problems I encountered as a result of the ice dam certainly seemed to cover all the usual bases insofar as:

First Quality rises to the challenge

Besides the necessity of adding a reputable and trustworthy roofing contractor to my "go-to" list, I learned that roofing repairs are a very specialized area of expertise. Looking back, I see that in my own state of fear over the roof dam, I did not question the roofing contractors as I should have. But I also remember a good deal of hemming, hawing and what my father would call "double talk" from them about what to do to fix it.

This is why First Quality stood out to me within moments of calling up their website. Professional and thorough, it taught me quite a few things that I wish I had known years ago about roof maintenance, roof repairs and insulation. So did their guide, "Questions to Ask When Choosing a Roofing Company in Las Vegas."

I can't do anything to change the past. But after meeting some members of the First Quality team, I'm relieved beyond words that I have the best "ladders" to come to my rescue when I need them most.

<< All About Green Roofs