A Full House: What Your Tape Measure's Diamond Means to Your Vegas Home Improvement Project

Nevada is one of those states where 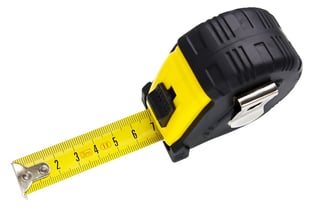 certain shapes have made a home for themselves. You're probably used to seeing plenty of aces, spades, hearts and diamonds on a regular basis, but the Las Vegas Strip isn't the only place where diamonds come by the dozens. If you've ever used a tape measure, you were holding onto a treasure trove of these four-pointed-shapes and you may not have even noticed.

What do the markings on tape measures mean?

Each marking on a tape measure is meant to do just that -- provide a means by which you can easily and consistently take measurements.

When it comes to projects involving Las Vegas home improvements, consistency is just as important as spacing. If you space things too close together, you could be spending extra money on unnecessary additional materials. Alternatively, if you space support materials too far away from each other, you're setting yourself up for disaster, as your structure may not be sound enough to hold up its end of the bargain.

The key when you're doing home improvement projects is to understand the proper spacing necessary for your particular endeavor. The markings on tape measures make it easy evenly distribute equipment and plan for the placement of materials by following the set of tick marks that's right for your situation.

What's the importance of an 8-foot space?

16-inch spacing is quite commonly used in home construction. This means a stud is placed every 16 inches. Most tape measures identify 16-inch intervals by way of red numbers or some other obvious marking.

When this spacing is used, within each 8-foot area, you'll have six supports.

So, what about that black diamond on your tape measure?

Depending on the type of structure you're working with, certain building codes do not require the full six supports per eight feet of space.

One less stud, when aggregated across the cost of a whole building, can add up to substantial cost savings.

Dividing that same 8-foot space by five support studs, rather than six, yields you a magic number of 19.2, which is the exact distance each of those black diamonds is away from the next one. In other words, the black diamonds on your tape measure represent a five-stud support system per eight-foot space.

Take a look at this YouTube video from NewWoodworker.com for an easy illustration of the way these markings translate into real life.

Why is it important to understand your tape measure's markings?

Your list of Las Vegas home improvements probably includes using a stud-finder a time or two. Once you figure out which spacing was used on your structure, you can easily use your tape measure's markings to find the next stud.

Are you preparing for a spring overhaul and making a list of Las Vegas home improvements that need your attention? Before you start tearing out walls and hauling home 2x4s, make sure your existing space is in tip-top shape.

Spring Cleaning: 10 Tips to Get Your House in Shape >>
All posts